While the $400 USD PlayStation VR headset doesn’t include the required PlayStation Camera, Sony confirmed that a PSVR bundle with a Camera and PlayStation Move will be available in North America.

During an interview with Sony Worldwide Studios President Shuhei Yoshida, Tech Insider learned from a Sony representative that “there will be a bundle in the [Sony Computer Entertainment America] region with Move and a Camera.” Further details about this bundle, such as price and amount of Move controllers, weren’t given.

Explaining the lack of a PlayStation Camera with PlayStation VR, Shuhei said it’s because so many people have one already. “We didn’t put it in because many people already own it,” he revealed. When asked how many, he simply replied, “A large enough number of people.”

Carrying a suggested retail price of $59.99 USD, the PlayStation Camera has gone as low as $29.99 during Black Friday sales. PlayStation Move controllers are around $25 on Amazon right now, but aren’t required for PSVR.

As for Europe, GAME has an unofficial PSVR and Camera bundle up for £389.98, which is £40 more than PSVR costs on its own.

How much would you pay for the bundle?

It’s been an exciting week for PS VR, but we still have more news to share. Starting at 7:00 a.m. PT on Tuesday, March 22nd, pre-orders will open for the PlayStation VR Launch Bundle at participating retailers. Exclusively for pre-sale and in limited quantities, this bundle will include: 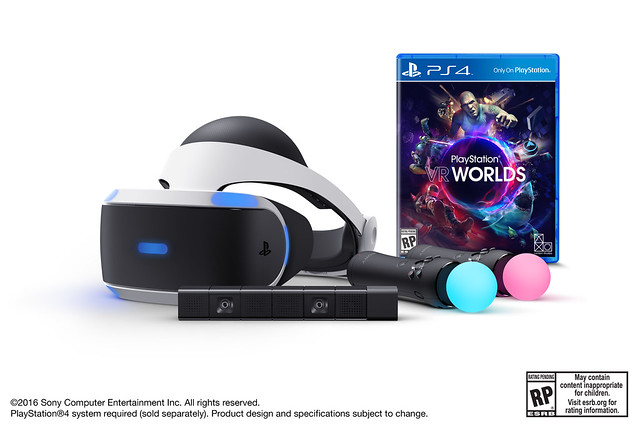 At $499.99, this bundle provides an unbeatable value for those of you looking to get right into VR gaming with your PlayStation 4. Since we’re including one of our top PS VR launch games, PlayStation VR Worlds, we know you’ll have a great experience right out of the box. This bundle will also be available in Canada for $699.99 CAD.

If you miss out on this wave of pre-orders, fear not – we’ll have another wave in the summer.

We’re thrilled with the response to PlayStation VR so far, and can’t wait for all of you to get your hands on one.