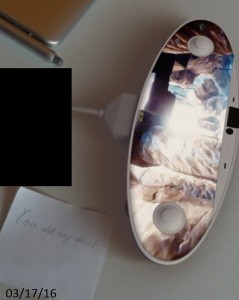 A few days ago, an allegedly leaked image of the controller of the Nintendo NX surfaced online, but today Reddit user Idriss2Dev (who is also the source of the original image) posted the video that you can see at the bottom of the post.

The video shows how he created the “leak” himself by putting the controller together on a 3D modeling software.

Recently there has been another “leak” with a similar design, which is most probably just as fake, even if we don’t have precise information on that one.

The “leaks” pretty much reproduce a patent that was uncovered in December. Of course, there is no indication that the patent actually is related to the NX’s controller, but it was obviously used as inspiration to create this fake and to give it a semblance of authenticity.

We have seen many articles alleging that this or that patent indicates a part or a feature of the Nintendo NX, but fact is that manufacturers often patent designs that aren’t intended to have a practical application on their upcoming console, if ever. That’s why we should take “leaks” that blatantly reproduce said patents with a large grain of salt.

Models that may appear realistic can easily be created in computer graphics by skilled artists, or even physically built from scratch by crafty pranksters.

Another making of video :