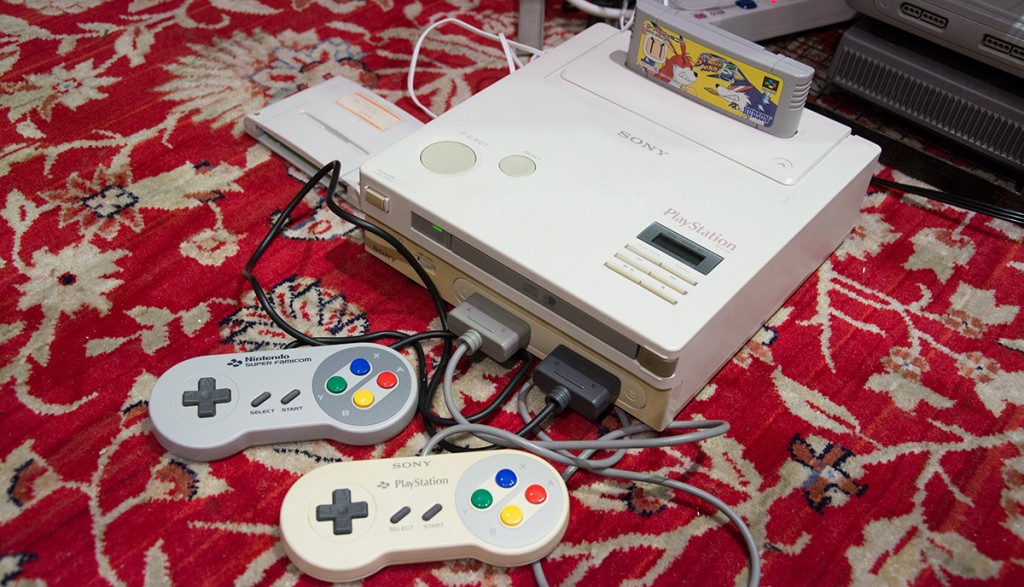 When a mysterious “Nintendo PlayStation” prototype with both an SNES cartridge slot and a CD drive made the rounds back in July, many remained skeptical. Not even Sony PlayStation’s head of Worldwide Studios, Shuhei Yoshida, wanted to confirm its authenticity. Or perhaps he just didn’t want to bring up the bad blood between his company and Nintendo over this failed collaboration.

Back in 1988, Sony inked a deal with the legendary gaming giant to add its then new CD-ROM technology to the upcoming SNES console. But when it came to money, they couldn’t reach an agreement: Sony allegedly wanted to keep all the money from CD licenses and then figure out royalties with Nintendo later. As you’d imagine, Nintendo didn’t take to this arrangement too kindly. Eventually, just a day after Sony unveiled this “Play Station” at the Chicago CES in 1991, Nintendo retaliated with a surprise move bypublicly breaking up with Sony in favor of Philips. Well, that partnership didn’t work out for Nintendo, either. But this infamous rupture did lead to the birth of Sony’s very own PlayStation, which went on to become one of the company’s most profitable assets today.

The “Nintendo PlayStation” is now the stuff of gaming legend, with reportedly only about 200 prototypes ever produced. But, as luck would have it, one of those systems fell into the hands of a father and son: Terry and Dan Diebold. We met up with the Diebolds in Hong Kong, where they were in town for a retro gaming expo, to hear how it ended up in their possession. Most importantly, we got to turn the “Nintendo PlayStation” on, play a couple of SNES games on it, and even take it apart to see if we could fix the dormant CD drive.

Thank you so much guys for bringing this all the way to Hong Kong. I understand that this is going to show up at the upcoming retro game expo, which is taking place at the HMV in Central, Hong Kong. First of all, I’ve heard several versions of the story, but I’d like to hear it straight from the horse’s mouth. Terry, can you walk us through how you got a hold of this in the first place?

Terry: Sure. The company I worked for, Advanta Corporation, they filed for bankruptcy (November 8th, 2009). When they did that, we purged the buildings. What you do is you take pictures, you itemize, and then they had an online auction. And I had gotten into the auction myself because there were a few things I wanted to buy. So I knew what were in certain lots. And when they called out the certain lot number, I raised my panel and I ended up winning it. You want to hear the ridiculous price? $75.

But you didn’t know what was inside? What were you actually after?

Terry: I actually packed the boxes with my boss. We had to go to the conference rooms and packed up the dishes. You know, for the big bosses meetings and stuff, all the good silverware and everything. So I knew what was in every box, there was a lot of new stuff.

I went to pay for [the lot] at the auctioneer and they turned around and said, “Here are your boxes.” And I go, “All of them?” They go, “Yes.” I thought: Well, that’s odd, because I don’t remember that many boxes. So I took two car loads to get my stuff home. There were some bigger brown boxes and I was like, hmm, this is interesting. I opened up one of them and it had a bunch of music CDs, about 200 of them.

So I opened up another box and inside was this puppy here [Nintendo PlayStation] with some games. I was shocked. There were also some plaques, some shoes, a tie. I was just shocked to see this there. I’m like, well this is neat. And I tried to find that [Nintendo PlayStation] online to see what it actually was, but there were no pictures or anything like that. So it’s been a tough road trying to find anything out about this, and in comes my son.

So how did this device end up at Advanta?

Terry: One of the board members, Olaf Olafsson, was the CEO at Sony Interactive Entertainment, Inc.

So someone must have forgotten to pick it up before the company closed up?

Terry: Well they closed his office up in New York and shipped everything down to our storage room, fortunately. So this came in with his personal stuff. This probably sat in the warehouse for a few years prior to that. 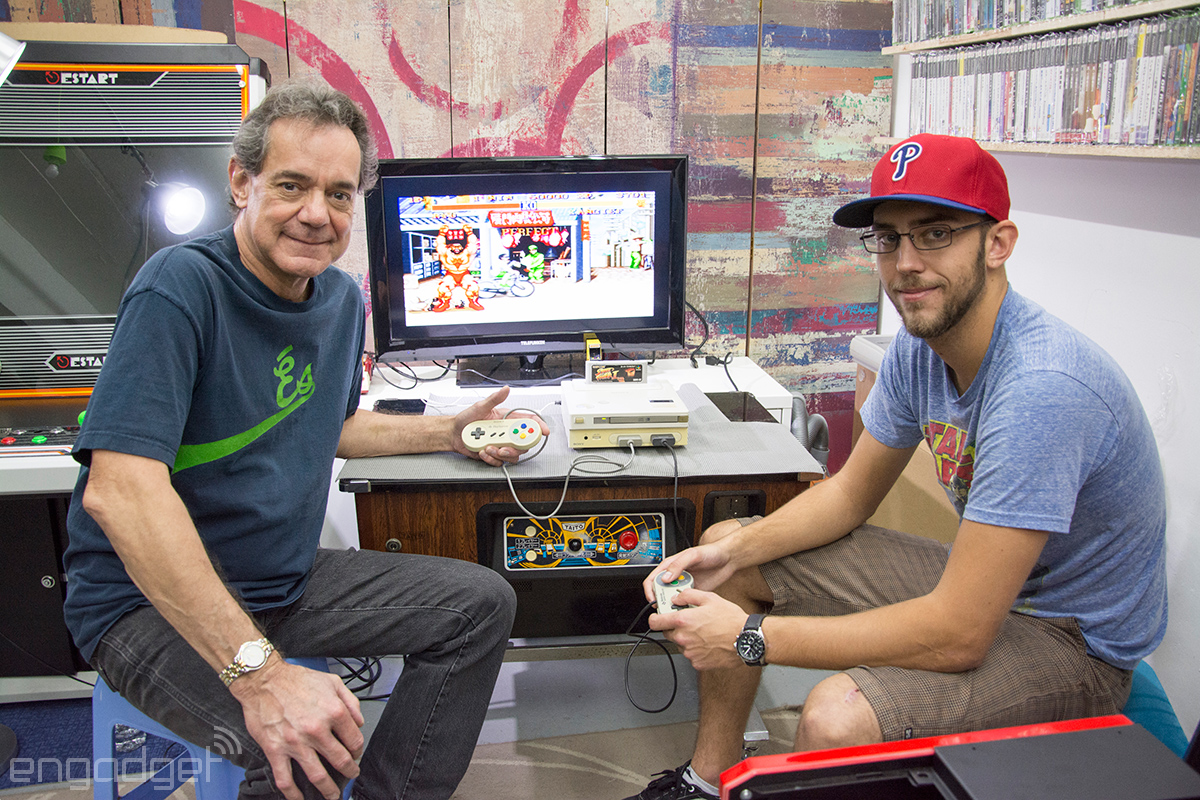 Terry (at left) and Dan Diebold, the owners of the ‘Nintendo PlayStation’
And then you kinda packed this away? You didn’t think too much about it, I guess?

Dan: It kinda just sat in the attic for a while with the Atari we have, the NES and stuff. I was graduating at high school and after a while, we kinda forgot about it.

I was on Reddit one day — I was on the TIL subreddit — and I saw a post that said, “Today I learned about the Sony and Nintendo collaboration that was supposed to be.” And I went into the comment section and threw a comment up there and said, “Hey, my dad’s got one of these in his attic.” Of course, nobody believed me. I tried calling my dad to get him to send me a couple of time-stamped pictures, you know, with my Reddit username and everything. But he couldn’t really get it correct.

“Today, I got to see the real deal so I can’t discredit it. And there’s even an OS. You can’t question it. It can’t be fake.”Daniel Lee, Restart Workshop

Terry: Well, I took the pictures but they weren’t that good.

Dan: Yeah, he was using like a flip phone at the time. He just recently got an iPhone. That’s his first smartphone. 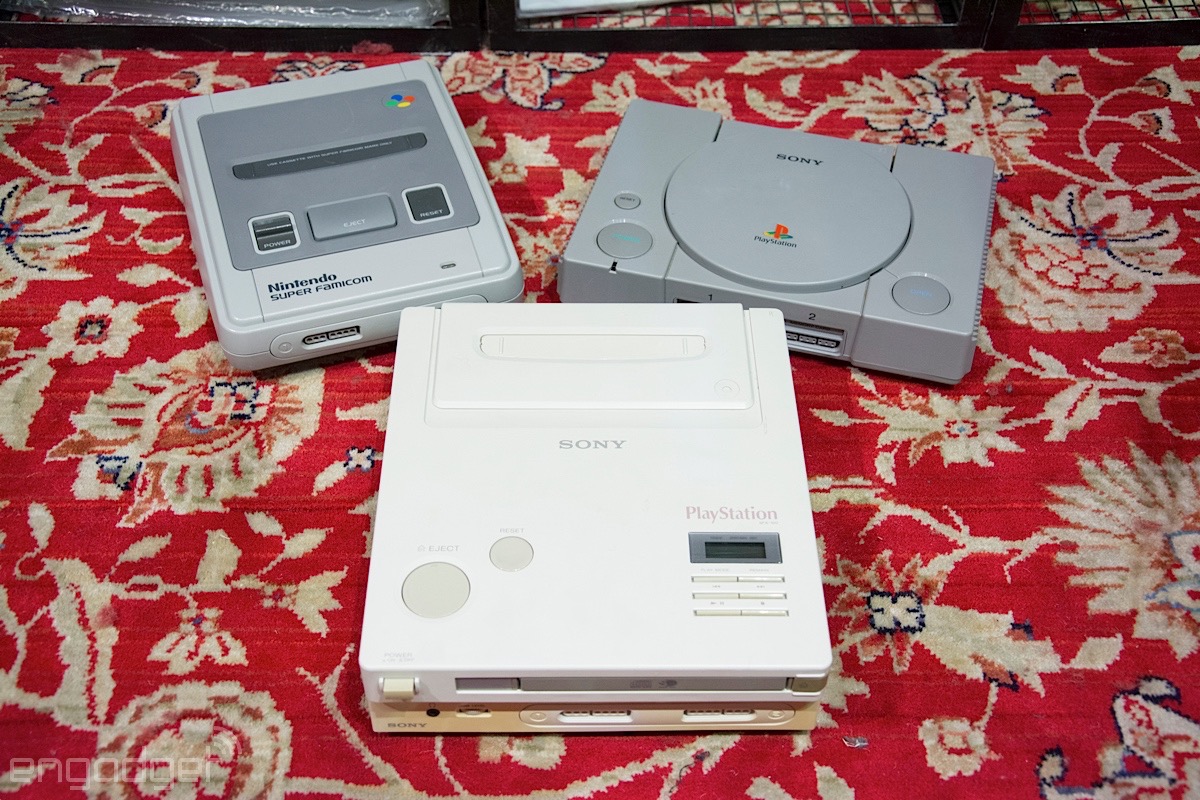 The PlayStation family tree
Dan: So a while later — I live in Denver. He lives in Philadelphia — I came back to visit for July 4th, and I called my dad and he was like, “Yeah, I’ll grab that thing out of the attic if you want to come and take a couple pictures of it while you’re here.” So I went over, took the pictures and made a post on Reddit (on July 2nd) and said, “It took forever, but I finally got some pics of my dad’s Super Disc.” And that was it. I went to a friend’s house for a party that night. My phone died. And the next morning, I woke up and I went back to my house, and when I plugged my phone in, it started blowing up. Some people actually asked me to make a quick video just to prove that I actually have it and everything. So I called my dad and said, “Hey, I’m coming over, you’re gonna help me film a quick video.” So I went over, filmed that quick video — the one that got over a million views. It took us five minutes. I filmed it, went back to my mum’s house.

But to be fair, that’s partly because you guys didn’t dare to turn this thing on.

Dan: We were kinda afraid to. We didn’t want to be the guys that got a one-of-a-kind video game system and then fry it. We would be the most hated people on the planet. 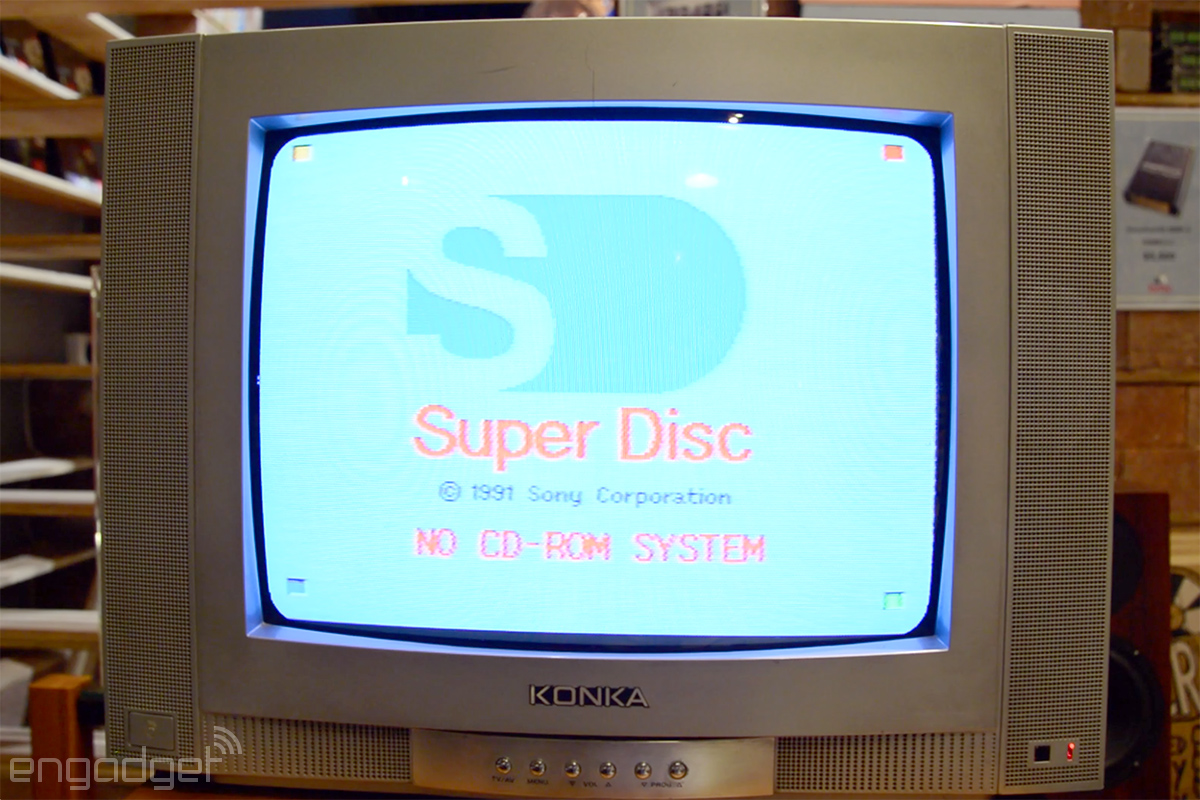 When the ‘Nintendo PlayStation’ demo cartridge is inserted, this boot screen appears.
My understanding is pretty much soon after you got to Hong Kong, you actually got hold of a power supply to try and boot this thing up.

Dan: We did turn it on. It works. It was quite sexy.

Terry: There were three happy campers in that room. It’s a good thing it had a roof on it, or else we would have just kept right on floating.

At this point in the conversation, we proceeded to plug the console into a TV, inserted a Super Bomberman 5 cartridge for the SNES and turned it on. The machine’s owners actually let me do the honors, and even though it was pretty much like turning on a SNES (the unit’s also compatible with the usual SNES controllers), it still felt amazing. Everything worked well except for the prototype’s audio output and the dormant CD drive. The debugging cartridge — labeled “For demo” in Japanese — that came with the prototype couldn’t detect the CD drive.

So now, are you guys going to do something about the CD drive? My understanding is our friend, Dixon, is going to put this in an x-ray machine?

Dan: We’re gonna make sure everything looks OK in there — make sure there’s no self-destruct, something like that. If everything looks good, we’ll take it apart and try to get that to work. Hopefully, it’s just some stupid loose cable. 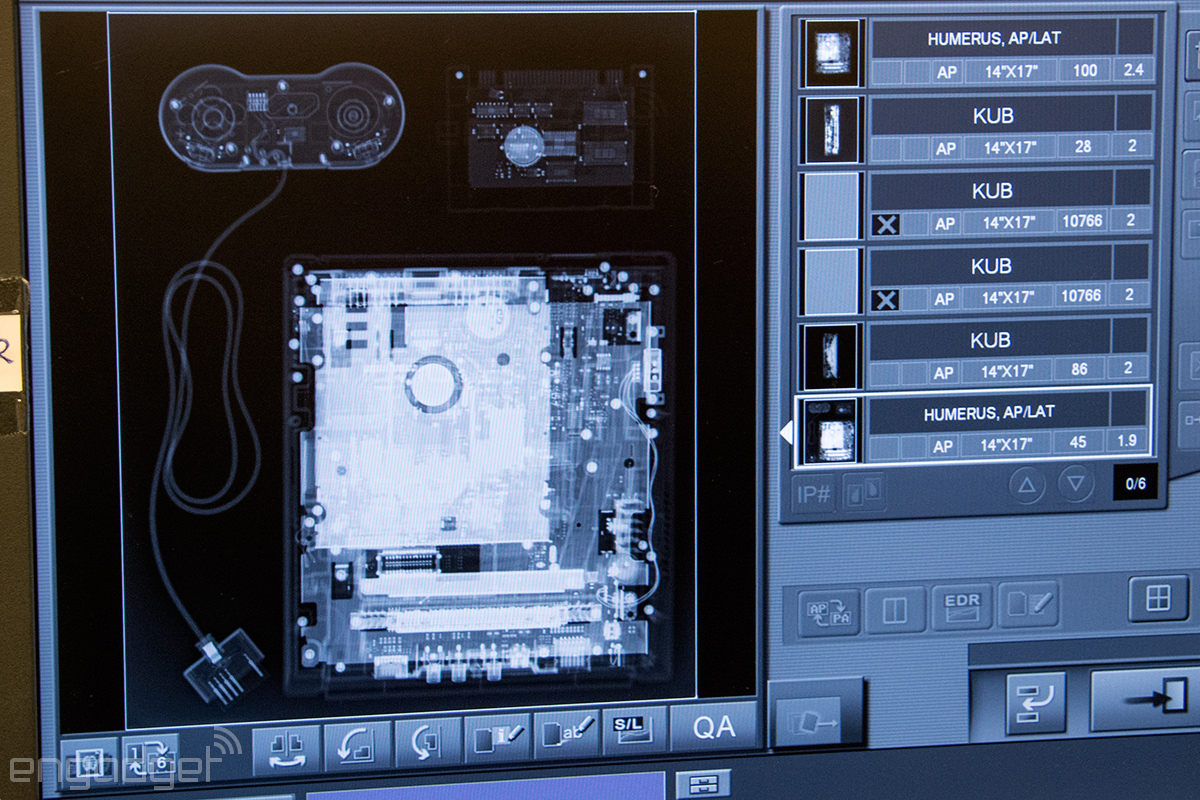 An x-ray of the ‘Nintendo PlayStation’
After the x-ray session, we showed the images to Restart Workshop’s retro console technician, Daniel Lee, who determined that it was safe to open up the device to see why the audio and CD drive weren’t working. Despite his years of experience in fixing and modifying retro consoles, Daniel couldn’t figure out these issues, but he confirmed that the CD drive was definitely receiving power. So it’s either the software’s fault or maybe the drive was indeed broken. Also, the logic board, the CD drive and the cases all had a “2” label, which could mean that this was the second prototype out of the alleged 200 units made.

Daniel, would you say this is the rarest console you’ve ever taken apart?

Daniel: Definitely rare in the sense that I got to confirm its existence amid its controversy because word on the street is that this doesn’t exist. But today, I got to see the real deal so I can’t discredit it. And there’s even an OS. You can’t question it. It can’t be fake. Going back to the chips we saw earlier on the logic board: NEC used to make gaming consoles, and Sony also participated here. And with Nintendo as part of this team, you just can’t discredit this.

Well, Terry, Dan, looks like the CD drive doesn’t work, or at least we can’t get it to work. Are you disappointed?

Terry: A little, but it still works. It plays games. Daniel from Restart says he’s going to do more research and see what he can figure out.

Dan: It kinda looks like maybe they disabled it on purpose.

Ah, that’s why the guy got to keep it, right? Oh well, that’s a bit of a shame, we’ll never get to find out if it can actually play PlayStation games.

Dan: It’s still one of a kind and super cool. Definitely awesome. 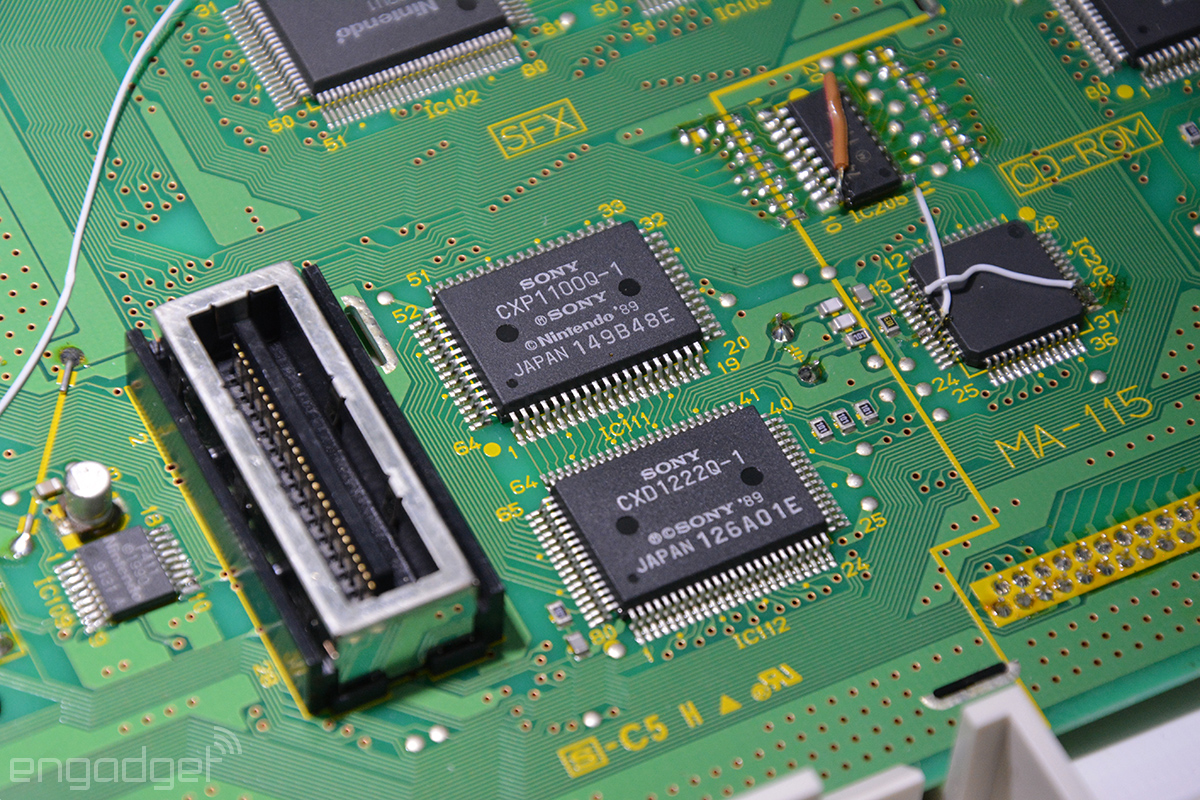 A close-up of the ‘Nintendo PlayStation’ circuit board shows both companies’ branding on the chips.